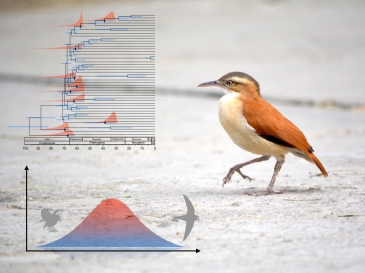 We are interested in how birds evolved and diversified. We focus on how speciation, extinction, dispersal and phenotypic evolution interacted over time and space during the diversification process to produce the diversity of birds we observe today. Our work aims aims for the integration of evolution and ecology. Most of our data is sourced from museum specimens and collection curation and development at the Royal Ontario Museum Ornithology collection are integral part of our work. We conduct fieldwork in different parts of the world to document vanishing avifaunas and obtain key scientific specimens. The following are the main topics of our research:

Accurate time-scaled phylogenetic trees are fundamental for studying the process of evolutionary diversification. We focus on phylogenetics and divergence-time estimation with the goal of generating robust time trees with which we can study the dynamics of diversification. We are working on establishing a more accurate time framework for the evolution of modern birds (Claramunt & Cracraft 2015). We are developing new strategies for calibrating molecular clocks based on the fossil record (e.g. Harvey et al. 2021 )and working with the Bird 10,000 Genomes (B10K) Project (Feng et al. 2020) to generate a new tree of life for modern birds.

Climate change and diversification in birds

Our analysis of the the new time-tree of modern birds revealed a striking pattern in which net diversification rates were negatively correlated with global temperatures: periods of slow diversification coincide with long-term trends of global warming while it is in periods of planetary cooling that diversification is faster. We interpreted this as the effect of tropical biome retraction and fragmentation (Claramunt & Cracraft 2015). We are now investigating this pattern and its explanation with improved time-trees.

Dispersal is a fundamental process in ecology and evolution; yet, it has resisted investigation at macroecological and macroevolutionary scales because it is extremely difficult to quantify. We are investigating ways of estimating the dispersal capabilities of birds based on their flight morphology and then use that information to investigate how dispersal influences the diversification process at macroevolutionary scales. Contrasting views are held regarding the role of dispersal on bird diversification but empirical testing has been challenging because of difficulties in quantifying dispersal. We are pioneering the use of wing morphology to quantify the dispersal ability of birds (Claramunt et al. 2012) and apply dispersal proxies to understanding macroevolutionary and macroecological dynamics (Claramunt et al. 2012, Weeks & Claramunt 2014, Sheard et al. 2020). 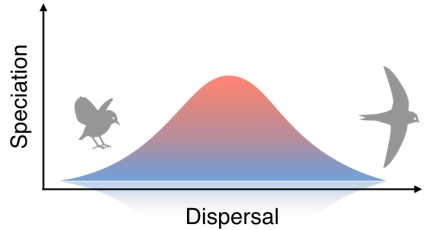 Avian aerodynamic theory makes specific predictions regarding the wing morphologies that result in greater long-distance flight efficiency and we are using those results to develop morphological proxies for dispersal based museum specimens. We have been using the hand-wing index, a proxy for the aspect ratio of the hand-wing, and we are now investigating the use of the total aspect ratio and the lift-to-drag ratio, which requires the estimation of power components using aerodynamic models (Claramunt & Wright 2017). We are putting these proxies to the test using empirical estimates of dispersal distances (Claramunt In press), dispersal challenge experiments, and patterns of movement across landscape barriers (several articles coming soon!). Our results confirm the predicted causal link between flight morphology and dispersal in birds.

Diversification of the Neotropical ovenbirds and woodcreepers

The Furnariidae (Neotropical ovenbirds and woodcreepers) is one of the most spectacular avian radiations, not only very diverse in number of species (nearly 300, the fourth largest avian family in the Americas) but also highly diverse in ecomorphological adaptations and specializations. Like Darwin’s finches in the Galapagos islands, they diversified both in number of lineages and in morphological and ecological traits but they have done so to a much greater degree and across an entire continent. We have been investigating the Furnariidae integrating species-complete phylogenetic trees and a variety of phenotypic, ecological, and climatic datasets with the ultimate goal of understanding the processes of diversification in continents.

In previous work, we discovered that the Furnariidae does not follow the classic patterns of adaptive radiations shown by island radiations such as Darwin’s finches: diversification through time in Furnariidae is not slowing down towards the present, suggesting that they are not being limited by competition (Derryberry et al. 2011), key innovations are not very influential on diversification rates (Claramunt et al. 2012), and character displacement is not detectable (Tobias et al. 2014). Therefore, it is possible that other factors such dispersal ability (Claramunt et al. 2012), geography (Claramunt 2014) and climate (Seeholzer et al. 2017) are more important for this large and old continental radiation. New phylogenomic analyses and improved time-calibrations will increase our ability to detect patterns and evaluate process related to the diversification of the Furnariidae.

We are also very interested in contributing to the development of research collections and translating our work on avian evolution into knowledge about avian diversity. We translate our work on avian phylogenetic into changes in classification (e.g. Claramunt et al. 2010, Claramunt 2014). Santiago’s work in the South American Classification Committee of the American Ornithological Society contributes to the creation of a standard authoritative classification of birds of the most diverse continent on our planet. He has also contributed significantly to the knowledge of the birds of Uruguay, Santiago’s homeland, as he is involved in studies of diversity, distribution, and conservation of Uruguayan birds, he is the  Uruguay country list coordinator of the South American Classification Committee and author and illustrator of the guide of the birds of Montevideo city (see online edition).